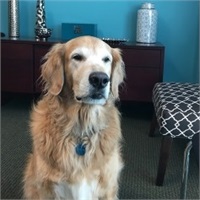 The late Mason, who joined James E. Moore Insurance Agency, Inc., on October 1, 2009, was the first Chief Morale Officer in the agency's history. His duties, which he dispatched with good cheer, included attending all staff meetings and conducting spontaneous check-ins with team members on site. Proud to serve as the firm's ambassador throughout greater Wilmington, Mason also accepted invitations to attend customer meetings. Mason's goal was to spread joy and happiness wherever he went, and he exceled in putting people at ease. He approached community service with the same enthusiasm demonstrated in his corporate responsibilities. When not at the office, he visited with old friends of all ages-and actively made new ones. After a busy day, Mason relaxed with 2- and 4-legged family members. After a workout of running or swimming, his next favorite hobbies were tending a small flock of stuffed animals, napping, and chewing on a good stick. A North Carolina native of many generations, Mason's mother and father hail from Leland and Greensboro, respectively. Although he spent his first year in Raleigh, and was a veteran traveler, he considered Wilmington home. Mason was a beloved member of the James E. Moore team and will truly be missed.  He's also left big paws for Bailey to fill.